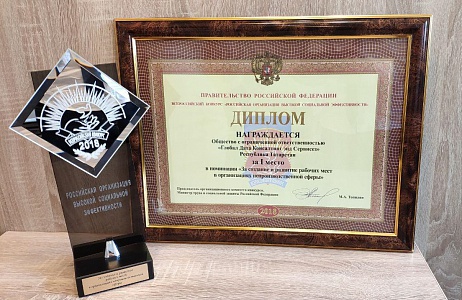 On April 26, Moscow hosted the ceremony of awarding the winners of the all-Russian contest «Russian Organisation of High Social Efficiency» in 2018.

ICL Services received the highest award in the category «Creation and Development of Jobs in Non-Production Organisations». The results of the competition were summed up within the framework of the meeting of the Russian tripartite Commission on regulation of social and labour relations.

«To receive such a high award is the best confirmation that we are on the right track in implementing our strategy of intensive growth and development, providing our customers with the best IT services. In 2018, we were among the winners of the priority project of the Ministry of Economic Development of the Russian Federation called National Champions, but the real basis for the growth of the company are our employees. Therefore, we are very pleased that our corporate culture and efforts to create an effective working environment have been highly appreciated. Our employees have the opportunity to grow and develop in IT, implement their ideas and be always on the pulse of all technological innovations. We will continue to combine talents in order to make the digital world accessible and reliable for business», says Director of ICL Services Sergey Solovyev.

The Commission of the all-Russian competition evaluated such indicators as salaries of employees, creation of new jobs and modernisation of the existing ones, social package, use of human resources. As noted by HR professionals, medical insurance, rental housing, tuition, provision of interest-free monetary loans, discounts on food and sport as important aspects in the adoption by the applicant of the decision in favor of the ICL Services.