ICL Expands Its Buisiness And Opens A New Technopark 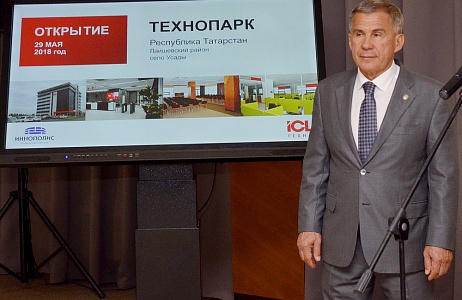 The President of Tatarstan visited Innopolis, saw over its building, held a ceremonial opening of the Technopark in a conference hall, as well as a meeting with V.I. Zverkov, Head of Strategic Development of SEZ and Regional Development Department, Viktor Dyachkov, General Director of ICL Group, and Mikhail Afanasyev, Head of Laishevskiy region of the Republic of Tatarstan, and Nosov I.N., General Director of Innopolis SEZ, JSC.

"Our goal is to expand our presence in the SEZ and become the center of competence and digitalization in Tatarstan and Russia, — said Viktor Dyachkov during his speech on the meeting devoted to the development of Innopolis SEZ. — We are actively delivering projects in the sector of Industrial Internet of Things, as well as the solution for automatic distribution of service requests between the Service Desk support lines on the base of artificial intelligence. And we continue expanding competencies in these fields helping the business to faster achieve better results."

The new office of ICL Group was built due to business expansion and launch of new innovative directions of activity, which created the need to increase the number of jobs and arrange suitable conditions for large-scale projects development. Company actively forms innovation teams occupied with research, development, and execution of projects in the field of machine learning, IoT, automation in Russia and abroad.

"Currently, our company deals with digital projects based on machine learning and computer vision. Among the main examples of such technologies benefits I would mention the quicker achievement of results by the company. These benefits are expressed in increase of employees efficiency and customer satisfaction. At the same time, the usage of manual operations and personal communications decreases, which brings to reduction of production cost," — says Dmitry Kashtanov, Head of Digital Direction of ICL Services company.

8-storey technopark with an area of almost 13,000 m² was commissioned in the first quarter of 2018. It is located in the territory of SEZ Innopolis Laishevo, not far from Kazan, and is designed for 1,260 people. The building planning includes general-purpose spaces located on the ground floor, as well as three transformable conference halls, a coffee bar, a dinning room, a recreation zone. Floors 2–8 offer open-space office rooms. The office center has a bright, modern design and was selected as a participant of Best Office Awards 2018 competition.

"Designing and constructing the Technopark we considered all requirements IT companies could have to the office and, as a result, the concept of a modern, innovative, comfortable office building was put into practice," — says Evgeny Stepanov, General Director of ILC Techno, LLC, a company which ordered and financed the building.

For the moment, IT Service division of ICL (ICL Services company) has already transferred to the Technopark building. The company works both on Russian and international markets rendering complex IT outsourcing services to such big market players as Leroy Merlin, Auchan, British Petroleum, etc.

Technopark is the third building on the site of Laishevo Innopolis SEZ. Earlier, in 2012–2013, an industrial electronic plant was built on the territory, and in 2013, an engineering center.