Director of ICL Services received the "Manager of the year" award 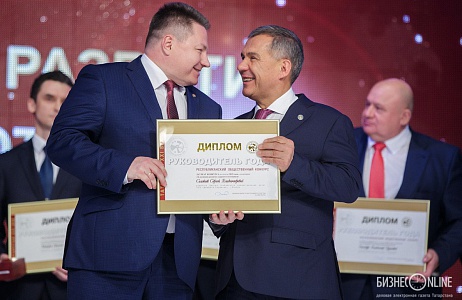 On December 24, the Korston Hotel & Mall Kazan hosted the fifteenth anniversary award ceremony of the contest «Manager of the Year». The event was held in a festive atmosphere of the New Year, with the participation of senior officials of the Republic of Tatarstan.

Sergei Solovyov received a diploma and a golden badge from the President of the Republic of Tatarstan Rustam Minnikhanov. The honorary award was given «For the active development of human resources». It is worth noting that in ICL Services the matter of support and development of competences of employees is a key one and the company is among the region leaders in the preparation of experts in the IT industry.

By tradition, a commemorative book will be published in followup of the contest «Manager of the Year.» It will be sent to republican and municipal authorities, the National Library and will be awarded to the winners.

For more information about the event visit the web-site of the Government of the Republic of Tatarstan.