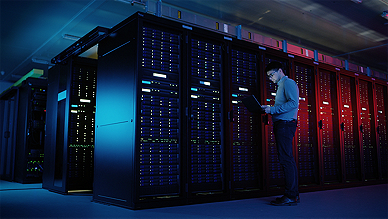 Gartner predicts that the global spending on data center systems will rise to $226 billion this year, up 11.4% compared to last year. Analysts consider the main reasons behind the increased demand for data centers capacity to be the development of digital business transformation and the mass transition to cloud services.
— What trends in the data center market seem the most promising to you?
— If we’re talking trends, I’d like to mention the trend of the «simplification» of data centers’ architecture. The technology is going further and further to make connecting to computing resources even easier. Hardware modularity, technological standards — the global thought is transforming data centers into infrastructure platforms, which can be used by anyone to deploy their own computing algorithms. In light of this, we should reach a situation where the data center becomes omnivorous to any hardware from any manufacturer. The only thing to pay attention to when making such a replacement would be the correspondence of hardware functional parameters.

On the other hand, this will lead to the globalization of data centers — meaning, the unification of disparate sites into a single conglomerate of computing power. Geographical location will cease to play any role, and the players that provide the most convenient mechanism for accessing computing resources will reign. Roughly speaking, the world is moving towards truly global public clouds, with anyone being able to become part of that cloud in terms of resources, just by building their own computing farm at home and plugging it in. Mining in the absolute if you will.

This future is blocked by a plethora of regulatory barriers: regional laws regarding the handling of personal data and issues of security in data transmission and processing are the most tangible slowdown factors.
I’d rather not get into a discussion about the rightness or wrongness of such regulatory practices, I’ll limit myself to saying that the issues and problems from which all this regulation grows are extremely complicated. There is simply no clear answer, and that’s why each «player» in this field solves the corresponding problems in the most efficient (from their point of view) way.

However, the world does not stand still, and while hardware manufacturers are developing standards at their level, standards in the field of data regulation are being developed simultaneously. So I’m sure that we’ll definitely come to «global data centers.»

— What should a data center be in terms of business needs in Russia? And what’s it like today? How can this gap be bridged?
— Moving on to the situation in Russia, I’d like to start with the fact that the maturity of our awareness of the value of information technology varies greatly from industry to industry. In the sphere of retail and fintech, for instance, Russia is confidently occupying leading positions on the global stage. At the same time, many areas of industrial production are still using mechanisms from the middle of the last century. In essence, this is why I cannot say exactly what a data center in Russia should be from a business perspective. Some in this business have already matured to end-to-end integration with geo-distributed computing clusters, while others still cannot get their «server rooms» in order. And you’d need wildly different data centers to meet the needs of both.

This makes me come to the conclusion that the Russian Federation urgently needs a package of standards in the field of data processing to unlock a huge consumer segment for data center operators, which now simply doesn’t have adequate tools to take full advantage of data centers.

— The first version of the Data Centers national standard was released. Are you satisfied with it? If not, what modifications does the standard require?
— I don’t want to discuss how bad or good the current version of the standard is. The most important thing is that it did appear. Yes, it will evolve to include more and more areas, but what it already has makes life for the entire IT industry much easier. Yes, its implementation is not always convenient and easy, especially when everything was created based on other requirements than those laid down in the standard. But that said, standards are the only thing that allows for things to scale. And that’s why I fully support the emergence of data center standards.

— Which should I choose: a cloud server or an on-premise one? In what situations is it better for a company to rent a physical server in a data center, and in what — to use the cloud services of a virtual data center?
— As for the standard «Own a server or rent a server» dilemma, in my view, the answer is very simple. It lies in the areas of accessible economics and the basic risks.

If you plan to run algorithms supporting your operational activities (in other words, you have a constant and «laminar» load profile) on your computing power, it’s better to run such processes on your own power. If, however, you realize that the load profile is very short-term and «turbulent,» it is better to do it using the capacity of a third-party provider that is willing to provide appropriate resource scaling in the event of severe peak computing loads.

If you use computing power to run algorithms that are your commercial know-how (for instance, a predictive model for determining consumer demand for a retailer), it’s better to do it where you’ll be most confident about the security of your intellectual property (as a rule, this is still the internal perimeter of the organization, but there are exceptions).

— «Green» data centers. Will they be in demand in Russia in the coming years? What do you need to create and operate them?
— As far as green data centers go, yes. Given that cross-border taxes aren’t going anywhere, minimizing the carbon footprint of production chains will definitely affect data processing as well. If a company utilizes a digital asset in its industrial production, the utilization method of such a digital asset will also be subject to analysis for the amount of carbon emitted. This means that «green» technology will not bypass Russian data processing centers. That said, of course, I’m not urging data center operators to build themselves new sites out of recycled materials. But, at the very least, it’s definitely worth thinking about energy efficiency systems. Given that our country has some of the cheapest electricity in the world, we have every chance of becoming a global «Data Center Fountain» in the future (remember, the main expense item for any data center is energy, not equipment or personnel), with all the ensuing global regulatory requirements in the field of decarbonization.

— Tell us about the features of data centers in Russia in the context of sanctions.
— Things get pretty interesting when it comes to data centers. On the one hand, the mass exodus of Russian algorithms (the said intellectual property) from Azure © and AWS © will lead to a sharp, perhaps even agitated demand for computing power inside Russia.

On the other hand, the imposed sanctions will not allow data centers to easily meet this demand. At the moment, in my opinion, Russia has a significant reserve of capacity (the consequences of the «first wave of digitalization»), so we’ll survive the first wave of «returns» rather easily. But then things are bound to get problematic: there is nothing to expand with. This means that those players who’ll be the first to find logistical schemes of supply to bypass the sanctions restrictions will have a serious advantage.
And I’d like to highlight the issue of information security, specifically the protection of intellectual property, which has taken on entirely new colors. Unfortunately, as things stand, I can’t guarantee that the transfer of algorithms from Western jurisdictions will shield the owners of these digital assets from theft.
In addition to the threat of asset seizure, there are risks even if a digital asset manages to travel safely to Russia. Its protection at the new location will be a crucial factor when selecting a particular physical site for its placement. As a result of ousting Western IT giants from Russia, the fairly long-standing «cyber espionage» was de facto joined by «cyber theft». This means that data center operators need to pay maximum attention to safeguarding the cyberactivities that they host.
Share: